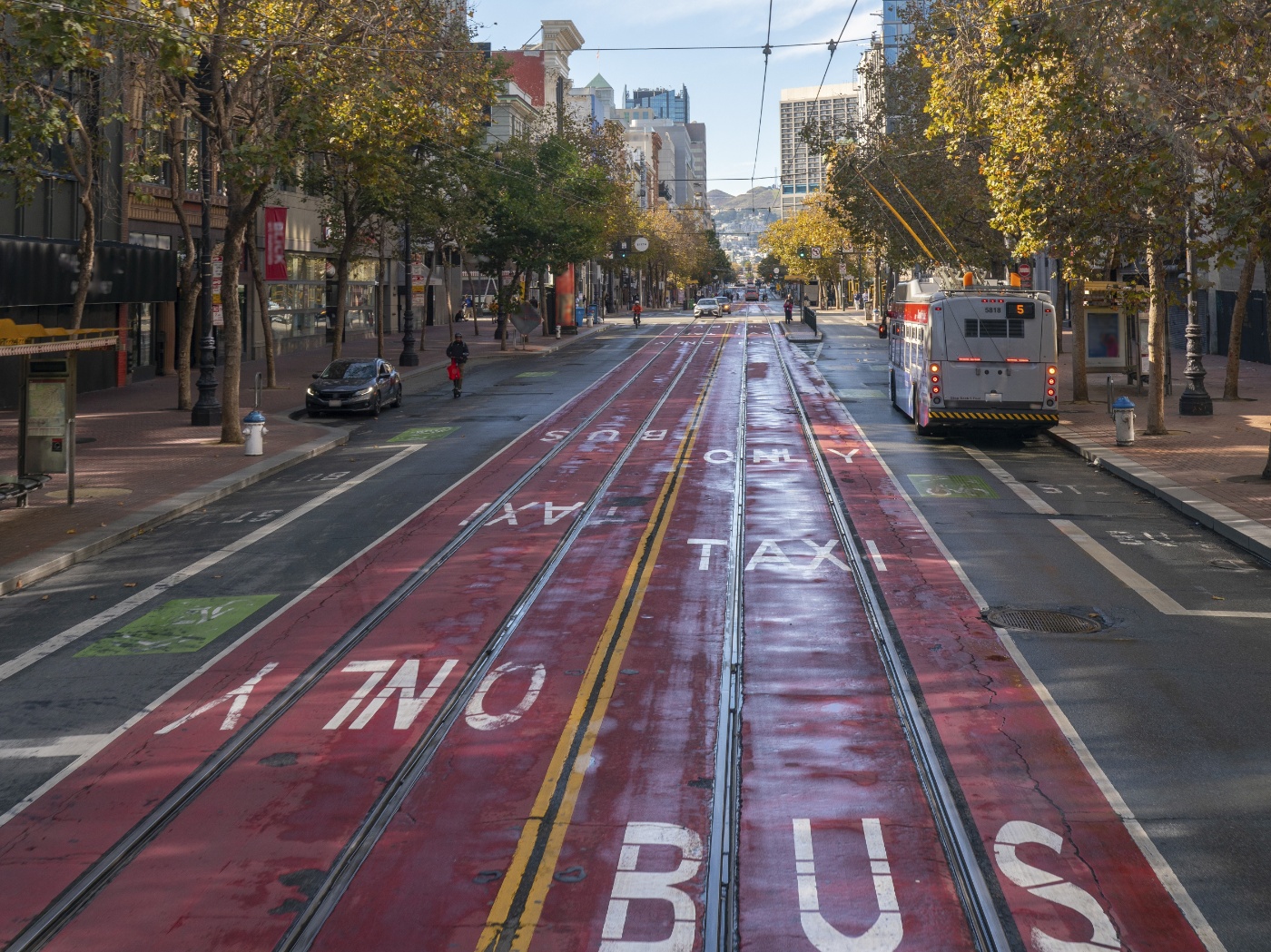 Cities of the Future – The mobility concepts of tomorrow

The perfect city? It's definitely one in which people can move around as they like, whether they're on foot, on two or four wheels, or using public transportation. We took a look at what the city of the future could look like.

Our cities must become more friendly! More traffic-friendly, more environmentally friendly, more people-friendly. Because in the face of climate change and ever-increasing traffic, more and more people are realizing that something has to change in the way we move around our cities. But what actually? We took a look at several interesting traffic concepts that have already shown how contemporary mobility works. And we talked to urban planners and transportation experts to find out what the mobility concepts of tomorrow are, and how we can implement them.

One thing is clear: The car, such a defining component of urban development for decades, is in fact not the best means of transportation in cities and is therefore facing increasing competition. This is, for example, the conclusion of the study "The Evolution of Mobility," which was prepared by the Zukunftsinstitut on behalf of the ADAC. "Metropolitan traffic will deal with fewer and fewer cars by 2040. Short journeys of less than 50 kilometers will increasingly be completed by a combination of cycling fast lanes and local public transport," it says. The key to new mobility in metropolitan areas is multimodality (i.e. the networked use of several means of transport), and smart mobility. What this entails can already be seen today in major cities in Asia, but also in San Francisco or our neighbors’ in Denmark and the Netherlands.

The Californian metropolis is regarded as an innovator when it comes to revolutionizing smart mobility. In 2015, the San Francisco Municipal Transportation Authority (SFMTA) conducted a comprehensive study to identify new smart mobility options, including e-scooter/scooter sharing, bike sharing, car sharing and ride-sharing services. What became clear from the study is that the future of mobility relies on sharing and networking. The prerequisite for this is that the various services must be easy to use and that there must be no barriers to access. San Francisco has therefore developed an app which allows people to seamlessly use all the different options to get from A to B in the city: Sharing offers, public transport, cabs and similar offerings. To make such services not only accessible from a single source (i.e. in an app), but even more attractive, the city has allocated dedicated lanes to road users of these services, where space-consuming individual traffic (i.e. cars occupied by one person) is no longer permitted. This means that those who use sharing models or public transport can get around more quickly.

Taking some space away from cars in cities and giving it to other road users is a bold move, but an important one for several reasons. This is evident in metropolises around the world that are reorganizing their mobility. For example, the ecological footprint of the bicycle is unbeatable compared to the car; even e-bikes emit around 5g of CO2 per person-kilometer traveled versus an average of 165g for the car. According to Ragnhild Sørensen of Changing Cities, "It is not practical to travel distances of less than ten kilometers by car, as is currently the case for 70 percent of all car trips. If all these trips were made by bike, we would save about two-thirds of all CO2 emissions from car traffic." And at the same time, particulate matter, other pollutants and a lot of noise and room would also be reduced. "Today, there are about 340 cars per 1000 inhabitants in Berlin. This number would have to be more than halved by 2030, according to the Federal Environment Agency," says Sørensen. Münster urban planner Michael Milde cites another reason why the growing number of cars is becoming a problem for cities: "Ten bicycles fit into the space occupied by one car."

In numerous cities, including Oslo and Copenhagen, motorized vehicles have therefore been largely banned from city centers. Paris, too, wants to close its historic center to cars and turn it into a huge pedestrian zone. In all these cities, the bicycle is enjoying increased popularity. The key to success is the same in all cycling cities: an extensive network of bike lanes that are clearly separated from the road, but also from sidewalks. This creates safety and prevents conflicts between the different modes of transport and road users. It is a matter of traffic light circuits that are coordinated for cyclists, of sufficient bicycle parking spaces, of good road surfaces. It is about networked concepts with public transport. As an example, in the Copenhagen region, every regional train offers space for bicycles; on the platform, before the train arrives, carriages in which there is still remaining space for bikes are displayed.

Similar to the San Francisco example, the same applies to the bike boom: cities that succeed are those that take some space (i.e. lanes) away from cars and give it to other road users, in this case, bicycles. "Space in our cities is limited. Any intervention in favor of the environmental alliance, i.e. bicycle traffic, public transport and pedestrians, can only be at the expense of the car," says Michael Milde, who can testify to how Münster has become a successful bicycle city over the years.

In any case, it is only a matter of returning to a state that has already existed: In the post-war period, the bicycle was the main mode of transport in German cities as well. Back then, almost two-thirds of people rode their bikes to work, school or university, while the rest took the bus or tram. And today? "Only 13 percent of all journeys are made by bike in Germany, compared to 28 percent in the Netherlands and as much as 36 percent in Amsterdam," says Milde, quoting the appropriate statistics. Nevertheless, Covid and the increasing number of sharing models for bikes and scooters have also spurred the bike boom in Germany, and the large number of people who have switched to bicycles are forcing local authorities to rethink their approach.

Another key role is played by how local public transport can relieve congestion on the roads. At the same time, however, subways and buses in the world's metropolises are reaching their limits. Singapore is considered the global showcase for perfect public transportation. The concept is amazingly simple: people use public transportation when it is good and inexpensive. Singapore therefore pays attention to low prices (a ride costs a maximum of 1.30 euros, children ride free), smart networking of arrival and connection times, and cleanliness is also a factor why the subways in Singapore are so popular.

Speaking of connectivity, Singapore also leads the world in a comparison of smart cities. The city makes current traffic data public and can thus demonstrably reduce traffic jams and congested roads. Connecting as many means of transport as possible is a key to successful mobility planning in the future. Cars, buses, trucks and two-wheeled modes of transport that communicate with each other on the Internet of Things can avoid accidents and traffic jams, and also find free parking spaces more easily.

Sharing instead of owning

This is another important building block for reducing the number of vehicles in cities in the future: Up to 40 percent of traffic in city centers is caused by the search for parking spaces. Car sharing is an important response to solving this problem. After all, when several people share a vehicle, fewer of them are needed in total in the same area. Studies show that one shared car can replace up to 20 vehicles. The sharing economy is primarily a question of age. Globally, it is becoming apparent that younger people are no longer as concerned about ownership. They like to actively use sharing offers - as long as they simply work and are adapted to individuals’ needs. Which brings us back to the example of San Francisco, where such sharing offers for bicycles, scooters, cars and ride-sharing opportunities, plus services such as Uber, are combined in one app.

Of course, the point is not to make personal vehicle traffic the scapegoat here. New vehicles are not only being networked with each other, but are also increasingly powered by electric motors instead of internal combustion engines. But this also requires an immense effort on the part of the municipalities: They have to offer a convenient charging infrastructure. In China, for example, around 330,000 public charging points are available for around 2.6 million e-vehicles. As a result, about 60 percent of all the newly registered e-vehicles on the planet are on the road in China. In Europe, the Netherlands is a good example of how e-mobility can be successfully promoted. If you don't have a parking space with charging facilities for your e-vehicle in Amsterdam, the city will set up a public charging point in the area free of charge. As a result, the number of charging stations has grown to around 4,000, making it the densest network in Europe.

So it's clear that there are many good examples of contemporary, more people-friendly mobility solutions. The question is how we implement them in our cities. "It takes a clear plan and a clear goal that a city consistently pursues. And it needs tangible examples of the benefits that this change brings," says Michael Milde in response. Malte Hübner of Critical Mass Hamburg takes a pragmatic view of the possible first steps: "Simple solutions such as 30 km/h speed limits in the city center, transit bans or a stronger focus on public transport can, in principle, be implemented quickly."

What can we do to accelerate change in our cities? Ragnhild Sørensen is convinced that "civil society is the only serious driving force behind the traffic turnaround; politicians don't seem to hear, or want to hear, the signals." And she issues a call for the people to take the initiative.