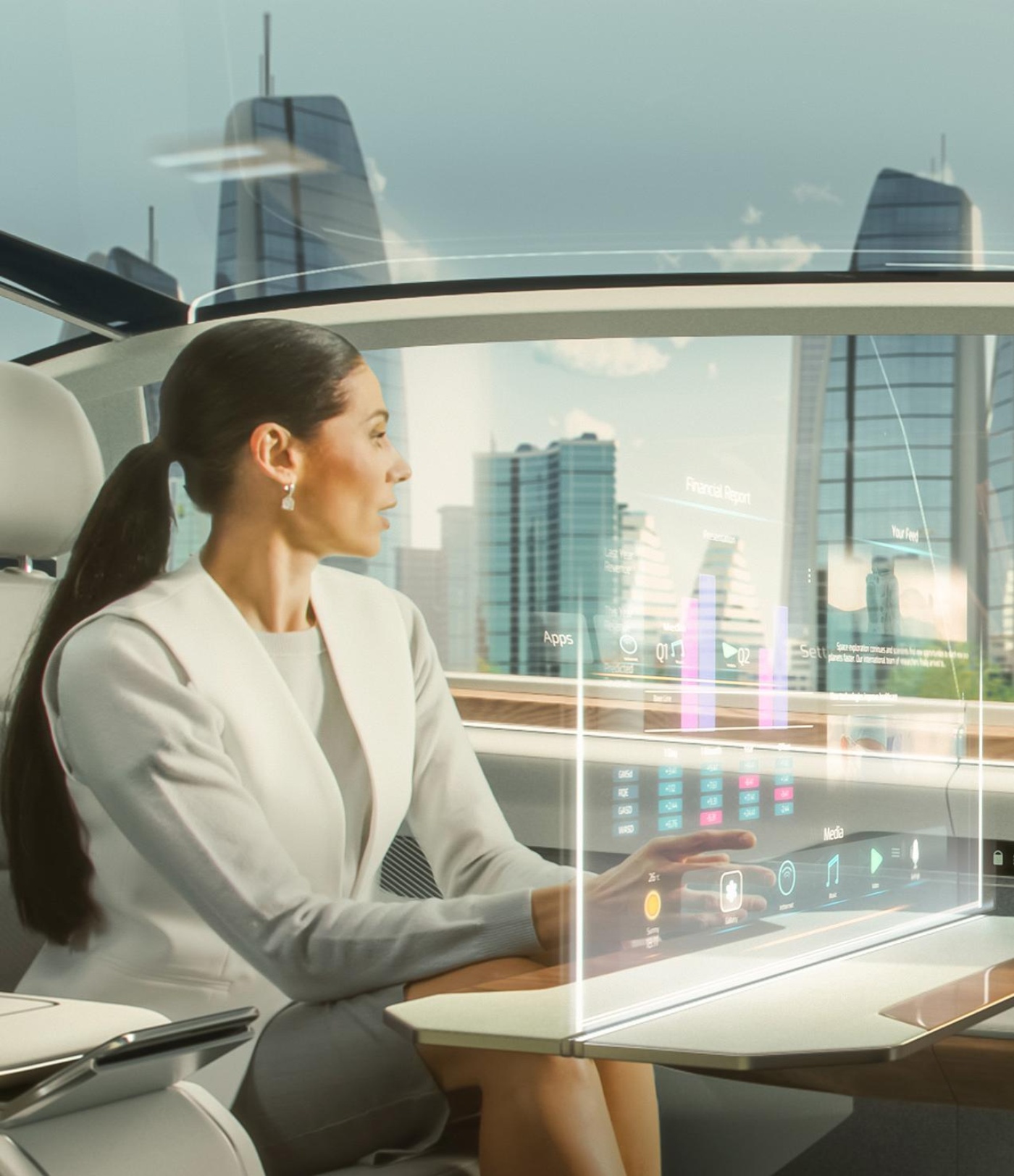 Autonomous, shared, with less private transport: Mobility is changing worldwide. But how can autonomous driving be integrated into the cities of tomorrow? Newly-planned cities often play a trailblazing role as “laboratories of the future” – and integrating an infrastructure for innovative mobility services here seems easy. But what approach do urban planners need to adopt in cities that have grown historically? And do self-driving cars really have great potential to reduce CO2 emissions? These questions are pursued in the IAA MOBILITY Visionary Club – in Abu Dhabi, where self-driving taxis are already on the roads. Spnosored by Bayanat.

Ingmar Schäfer has a clear vision when he thinks of autonomous mobility in the city. He envisages seamlessly-integrated digital systems, making it easier for consumers to be mobile and to choose a suitable mode of transport. An app, for example, “enabling me to enter a location in Dubai and then I get the whole range of options for that trip.” The Principal at Boston Consulting Group (BCG) is an expert in automotive and mobility, and has strategy consultancy experience in Europe, the USA, and the Middle East.  He has been living and working in Dubai for more than ten years. In his vision, he can use the app to choose whether he books a self-driving car to take him to the station for the flying taxi for his trip from Dubai to Abu Dhabi, or whether he goes for a cheaper option: “By e-scooter to the nearest robo-shuttle station to the self-driving bus that takes me to Abu Dhabi.”

A bold vision. But is it actually a Utopian vision, for the distant future? Hasan Al Hosani is CEO of Bayanat. The company, based in the United Arab Emirates (UAE), is a leader in the fields of geo-data intelligence, data analysis and AI (artificial intelligence), and it operates TXAI, a taxi service using self-driving vehicles in Abu Dhabi. “The technology is there. A key challenge is regulation,” he says – although there are innovation-minded officials amongst the authorities in the UAE, and notably those in Abu Dhabi. The discussions for establishing the taxi service mainly revolved around the question of how to make that possible, he relates.

In Hasan Al Hosani’s vision of future mobility, too, it is above all Mobility-as-a-Service (MaaS) that plays the leading role. The aim here is to offer users transportation that is optimally matched to their requirements. It means that fewer people need their own vehicle, because they are sharing the means of transport and the total traffic volume is reduced e.g., through ride-pooling or ride-hailing. For Al Hosani, MaaS is the key component for the mobility of the future, which will be autonomous. “Once autonomous systems come into play, people will make use of that convenience,” he says in the IAA MOBILITY Visionary Club. However, the unpredictability factor needs to be taken into account “if you are dealing with AI or analytics. You cannot predict people’s movements, drivers’ reactions, or a tree that suddenly falls onto the road.”

Artificial intelligence (AI) needs time to learn, he says. “We see AI like a young child. It learns every day, familiarizes itself with its environment, and becomes ever more accurate.” His conclusion from this? “We need to increase the number of autonomous systems in our environments, so that we can improve its capabilities and be confident that we can raise it up to a higher level.”

That is also his advice for handling the regulatory authorities: “Seeing is believing”, says Al Hosani, and he describes how even his company took a step-by-step approach to introducing the self-driving taxi service. For as long as the car is driving autonomously at Level 3, Bayanat retains a security officer on-board – so that the passengers feel safer, but also so that the regulatory authorities can become more confident themselves. Level 3 means highly-automated vehicle travel, such that the person at the wheel can use a phone or watch a film, but must be ready at all times to take over the steering.  In addition, only speeds up to a maximum of 60 kmph are allowed in this mode.  And the car is only permitted to drive on routes that are separated from the oncoming traffic by a barrier.

At Level 4, Bayanat has similarly retained the human escort. Level 4 autonomous driving means that the vehicle navigates itself and copes with even highly complex traffic situations, such as the fallen tree mentioned earlier, for example. However, in an emergency someone must be able to intervene at the wheel. When launching the autonomous taxi service, “we defined specific phases”, says Al Hosani. That has paid off: “Based on our experiences, we can expand geographically and in terms of vehicle types.”

Fewer vehicles on the roads, fewer accidents, and lower emissions – autonomous driving promises all that.  But particularly with regard to reduced CO2 emissions, can self-driving vehicles really contribute to less pollutants reaching the air? Al Hosani is convinced of it: With less stop-and-go driving thanks to better-organized traffic and more consistently-maintained speed, the emissions levels will already be reduced. And as soon as the interaction between vehicles and infrastructure via V2X increases in future, that would simplify traffic flows for transportation and drop-off and pick-up points, along with stops, would be less congested.

Ingmar Schäfer underpins these arguments in the IAA MOBILITY Visionary Club, citing a study by Boston Consulting Group in collaboration with St. Gallen University that also looked at the impacts of autonomous driving: “One of the findings was that Los Angeles could save 2.7 tons of CO2 emissions per year.” And even if that seems like a drop in the ocean, “if every city does its bit, it will be effective.” For example, if autonomous shared mobility was introduced New York could make alternative use of an area of around 900 blocks, currently needed for parking spaces. “That’s roughly six Central Parks,” Schäfer emphasizes. It’s a scenario that certainly pleases many people – and not just in New York.